“I have seen many people delve into the knowledge of the fixed stars… However they adopted latitudes and longitudes they found in books. They then drew them on the globe without knowing which was false and which was true” – Abd al-Sūfī commenting on the reliability of star calalogues

Authors note: I will refer to him as Abd al-Sufi, or a variation of the same name, for ease of writing and reading.

Who was Abd al-Sufi?

Abd al-Sufi was a Persian astronomer who revolutionised the way we look at the heavens. Even today, over a millenia later, much of the astronomy used is based on his work and would not be possible without it. [1][2][3][4][5]

He is most commonly known for his book “The Book of Fixed Stars” which is a correction to the Almagest written by the Greco-Roman astronomer Ptolemy, (a treatise which contains several contradictions and mistakes between copies [5, Page 79]), and in writing this he unknowingly discovered several astronomical objects including: The Andromeda Galaxy, The Large Magellanic Cloud and several stars. During his life he published many writings and drawings, however The Book of Fixed Stars describes the forty-eight constellations that were established by Ptolemy and adds criticisms and corrections to them. For each he provides the indigenous Arab names for the stars that made up the constellation, drawings of the constellations, and a table of stars showing their locations and magnitude. [1][2][4][5][8.1]

The Book of Fixed Stars is referred to by various other titles such as:

Book of the Images of the Fixed Stars.[9]

Book of the Constellations of the Fixed Stars.[8.1]

Atlas of the Heavens.[2]

As can be expected, not much is known about his life.  From his name we know the title al-Rāzī means he was born in the town of Rayy, which at the time was a major city in northern Iran. It can be located today in south east Tehran – the current capital of Iran. [5, Page 47]

He lived and died during the rule of the Buwayhid dynasty during the 10th century (he mentioned in his writings that he was dedicated to the Buwayhid ruler, Aḍud al Dawla) and despite his family being from Nisā he spent most of his time between the cities of Rayy, Isfahan and Shiraz. [5, Pages 47,49]

Abd al-Sufi was undoubtedly one of the most outstanding astronomers to have ever lived. He is known mostly for being the first person in recorded history to have observed the Andromeda galaxy, as well as taking the time to individually fact check Greek astronomer Ptolemy’s measurements of the brightness and size of stars. However, he also completed a lot more in his life. [2][3]

He wrote about the Greater Magellanic Cloud and published several books in his life other than The Book of Fixed Stars. [4] The works of al-Sūfī are as follows:

A complete translation into English can be found here: Part 1 Part 2 and scan in colour can be downloaded here: Scan in Colour. It was translated by Ishan Hafez (reference [5]) and the colour copy is on the Met Museum website (reference [8.1]).

al-Sufi’s most famous work, The Book of Fixed Stars is an astronomical text that was written in an attempt to create a comprehensive star catalogue based on Ptolemy’s measurements. He translated it from Greek to Arabic and this was done because many Greek astronomers at the time would falsify their readings in an attempt to be the first to discover and record certain observation – as opposed to performing good scientific observations – which lead to widespread contradictions and mistakes between copies. [5, Page 79][7][8.2]

A constellation as seen from the Earth and on a globe. Source [8.1] 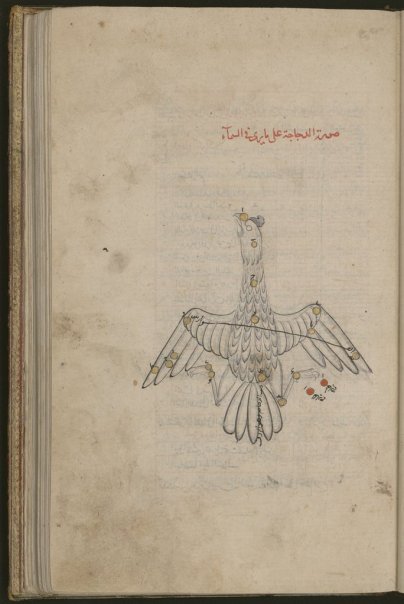 A constellation as seen from the Earth and on a globe. Source [8.1]

The Book of Fixed Stars contains fifty-five astronomical tables and duel charts of forty-eight constellations (one as seen in the sky and one as depicted on a globe). The constellations were divided into three distinct categories, showing a level of organisation and planning not seen in astronomy at the time, as many texts were convoluted and confusing. It is reported that he not only gathered information from his own readings but was extremely resourceful – paying several fishermen to record the sky on their voyages to different cities every night. From this he was able to produce a comprehensive map of the sky over the oceans. [5, Page 3]

A massive poem made up of 495 verses in total with each stanza describing the constellation in a simple and easy to understand language. This work is usually found at the end of the manuscripts of al-Sufi’s Book of Fixed Stars and has led to much confusion regarding the identity of the original author. The first six paragraphs confirm that the author was Abd al-Sūfī’s son and it has been confirmed to have been written after Abd’s death.  [5, Page 59+60]

2. The Book of Information and Projection of the Rays

A book focusing on astrology composed of tables and instructions on calculating astrological charts. Unfortunately it has been lost to history with us only knowing about it now as it was mentioned in biographical work of al-Qiftī (A Muslim, Egyptian scholar most commonly remembered for one of his two surviving works “A History of Learned Men”). [5, Page 59+60]

3. Introductory Book to the Science of Astrology

4. On the Explanation of the Use of the Celestial Globe

The only two surviving manuscripts of this are in the Saray Library in Istanbul. Not much is known on its contents.[5, Page 60]

5. Book on using the Astrolabe

An Astrolabe is an elaborate instrument used to measure angles. There are seven copies of this book by al-Sūfī that have survived to today; they can be found in museums in Paris, Istanbul, Tehran and St. Petersburg. This is one of the most exhaustive books to have ever been written on the subject of Astrolabes, showing extreme attention to detail in the scientific method. It is comprised of 1760 chapters on the construction and use of the instrument. They were extremely popular and were used globally to find the qibla (The qibla being the direction Muslim people face to pray towards the city Mecca). More information on them and their use in ancient Islamic astronomy can be found on our resources page. [5, Page 60]

A Zīj is an Islamic astronomical book that tabulates the parameters used for astronomical calculations of the positions of the Sun, Moon, stars, and planets. Unfortunately there are no surviving copies.

al-Sūfī died in 986 AD at the age of 83. It has been reported he lived a long and healthy life, and thanks to his religion he produced amazing and detailed work from several observations. Additionally, due to having the honorary religious title of al-Sūfī as part of his name we know he lived a relatively comfortable life. More than a millennium later, al-Sufi’s keen observations and detailed work still informs our view of the night sky with much of the science we used today being steeped in his findings.

He is honoured with a crater on the surface of the moon being named after him. The Azophi impact site lies on the south central highlands of the lunar surface with the lunar coordinates 22.1°S 12.7°E. [2][3][4][5]

References are categorised by the following types:

Authors Note: Abd al-Sufi was one of several ancient Muslim astronomers who lived over a thousand years ago without whose work much of the science we use today would not be possible. Thanks to Islam these astronomers’ work is astonishingly accurate as astronomical observations were considered a holy occupation. For the time period it was written in and comparing many of his readings to the modern equivalent, we find that the data collected was astoundingly well documented. Much of the science used today can be attributed to Muslim astronomers centuries ago, with their work being free of the centuries of colonialism and racism that informed much of the western history of science we understand today. The islamic golden age in astrophysics created some of the most outstanding science produced by humans, many lessons of which desperately need to be applied to modern day STEM, specifically the ideas of sharing resources freely and working towards a shared goal, and not rushing to be the first to discover an answer to a question in science.

For more information on POC scientists please visit our resources page or read through the rest of our blog. We are constantly updating both.

Written by Karel Green. For more information see the about page or follow her on twitter @thisismeonline.

One thought on “Abd al-Sūfī and Observational Astrophysics in Ancient Islam.”