“Nothing is impossible. There were so many countries that failed in their first tries. But we weren’t disheartened and we didn’t accept that.” – Nandini Harinath referencing India succeeding in putting their craft into Mars orbit on the very first try

What was the Mars Orbiter Mission (M.O.M)?

The space probe (called Mangalyaan or “mars-craft”, a combination of the Sanskrit words  मंगल mangala, “Mars” and यान yāna, “vehicle”) which has been orbiting Mars since the 24th of September 2014 was launched by the Indian Space Research Organisation (ISRO) on the 5th of Novermber 2013, and the entire cost of this mission was just 4.5 billion rupees ($74 million dollars).[5] NASA’s Mars orbiter mission, MAVEN, which was launched two weeks after India’s Mars Orbiter Mission, cost a whopping $672 million, making it nine times more costly.[6] Bannihatti Dakshayani, Ritu Karidhal, Nandini Harinath, Anuradha TK are all space scientists at ISRO who were involved with this space mission, among others.

The careers of Dakshayani, Harinath, Kuridhal and Anuradha TK

Bannihatti Dakshayani studied Engineering at university, and even though her father believed a Bachelor’s degree to be sufficient education for her, due to her love of the field and perseverance against patriarchal values at the time, she continued her studies in STEM going on to earn a Master’s degree in Mathematics in 1981 from the University of Mysore. After graduating, she taught Mathematics at the Sir Vishveshwaraiah Institute of Science and Technology in Madanapalle (Chitoor District, Andhra Pradesh), an institution involved in helping improve the primary and secondary education of children who live in the poor parts of the countryside in this area. [1]

In 1984, Dakshayani joined the Satellite Centre in the Indian Space Research Organisation (ISRO) and her work there involved orbital dynamics and computer programming; having taught herself computing entirely as up until joining ISRO she had never seen a computer; yet another example of her incredible talent and fortitude. She created software which was used for the generation of spacecraft trajectories and this was used for many space missions. In 1998 she completed a second Master’s degree in Aerospace Engineering at the IISc (Indian Institute of Science).  She was responsible for orbit related operations for Low Earth, Geosynchronous Orbit and Interplanetary missions of ISRO, development of reliable onboard algorithms required in controlling the IRNSS spacecraft and various Low Earth Missions from TES onwards to Cartosat-2E.  With regards to the Mars Orbiter Mission, she was the Deputy Project Director for the group involved in orbit dynamics; her work entailed coordinating orbit related activities, including designing trajectory generation software which was used for various mission operations and manoeuvre designs including the vital Mars orbit insertion which lead to the success of the entire mission. [8] She was also the project manager for the Space Capsule Recovery Experiment (SRE-1), which was an Indian experimental spacecraft launched by ISRO in order to demonstrate its capability to recover an orbiting space capsule, and the technology of an orbiting platform for performing experiments in microgravity conditions. Due to her tremendous contribution to the Mars Orbiter Mission project, she won the ISRO Merit Award, and a Certificate of Apprectiaton for her work for the SRE-1 mission. [10]

Ritu Karidhal was born in Lucknow, Uttar Pradesh. Even when she was just a young child, she knew she was destined to work in the field of space science; gazing at the night sky, studying the stars, the period of the moon, and thinking about what lay beyond. As a teenager, her interest with space science grew and she collected newspaper articles which involved astronomy and space science and the activities of ISRO and NASA. Karidhal graduated from the University of Lucknow with a Bachelor’s degree in Physics and after passing the Graduate Aptitude Test Exam (GATE), she went on to pursue a Master’s degree in Aerospace Engineering at the Indian Institute of Science (IISc).  She began working for ISRO in 1997 and with regards to her work in the Mars Orbiter Mission, she had a huge role in the creation of the space-craft Mangalyaan, especially with the detailing and the execution of the craft’s onward autonomy system, which according to Karidhal is the “brain of the satellite, a software system coded in well enough to function on its own, determine what and when to detach, anything that needs to be infracted. If there’s malfunction, the system needs to be designed well enough to correct and recover on its own in outer space.” [11]

She was also the Deputy Operations Director of the Mars Orbiter Mission, meaning that it was up to her to ensure that every single operation performed during the mission was executed flawlessly. Due to the nature of space manoeuvres, the smallest flaw can spell disaster, so every detail involved in the mission was vetted by her. In 2007, Karidhal received the ISRO award from the president of India at the time, A. P. J. Abdul Kalam, who was himself an Indian space scientist and physicist.[2]

Currently, Karidhal is involved in work on the Chandrayaan-2 mission, which is India’s second lunar exploration mission after Chandrayaan-1. It will be launched by ISRO and includes sending a lunar orbiter, lander and rover, all developed solely by India, and set to launch in January 2019, and will test new technology and conduct new experiments on the moon’s surface. [11]

Nandini Harinath was brought up in a family that had a love of STEM; her mother was a maths teacher and her father was an engineer. Harinath first got interested in space science through exposure to Star Trek, a popular science-fiction series which her whole family loved. [4] Harinath has been working at ISRO for 20 years and during this time has contributed to 14 space missions. Her work on the Mars Orbiter Mission involved being the Deputy Operations Director, and she is currently the Project Manager for Mission Design at ISRO. On the proportion of women working at ISRO, Nandini comments: “Women constitute only 20% of ISRO’s 16,000-strong workforce, but female engineers are increasingly joining in. There’s greater awareness and education among young women now. Parents are being supportive of their daughters pursuing careers.” Nandini also highlights the problem that exists in the workforce where women who are highly educated often drop out or don’t take up leadership positions, something which is common in the Indian workforce due to misogynistic double standards that exist within some communities: “That’s the mindset we need to change. Women have to realise that they can manage having careers and families. It’s possible! You can do it if you want to.”[12]

Anuradha graduated with a Bachelor’s degree in Electronics from the University Visvesvaraya College of Engineering in Bangalore. On the 15th of July 2011, the ISRO communication satellite GSAT-12 was launched into space from the Satish Dhawan Space Centre. This was a satellite which Anuradha had a massive role in developing, having to supervise and head a team of 20 technical engineers. Together with a whole team of women engineers, GSAT-12 was maneuvered into position from ISRO’s Master Control Facility (MCF). She was also responsible for leading the team which put the much larger communication satellite GSAT-10 into orbit in September 2012. She was the project director for the launch of the GSAT-9, GSAT-17 and GSAT-18 communication satellites. Her speciality in her work in space science is satellite checkout systems which observe a satellite’s performance once it is in space.

Her career at ISRO has spanned 35-years, and during this period of time she has won numerous awards for her ginormous contributions to getting India to the reach the stars. Her awards include the 2003 Space Gold Medal award by Astronautical Society of India for the services in the field of Space sciences and the 2012 ISRO Team Award 2012 for being team leader for the realisation of GSAT-12. [3]

When asked why the number of female scientists at ISRO is below 50%, she replied:  “because we [Indian women] are still carrying cultural loads on our backs and many women think their priorities lie elsewhere, at home” but that “Once girls see that there are lots of women in the space programme, they also get motivated, they think if she can do it, so can they.” [13]

How has this mission been portrayed in the media?

Even though this mission was a massive success, especially considering how it was far cheaper than any other Mars orbiter mission in history, due to racism and intellectual elitism some media sources mocked India’s excellent work. The following gauche and racist cartoon appeared in the New York Times: 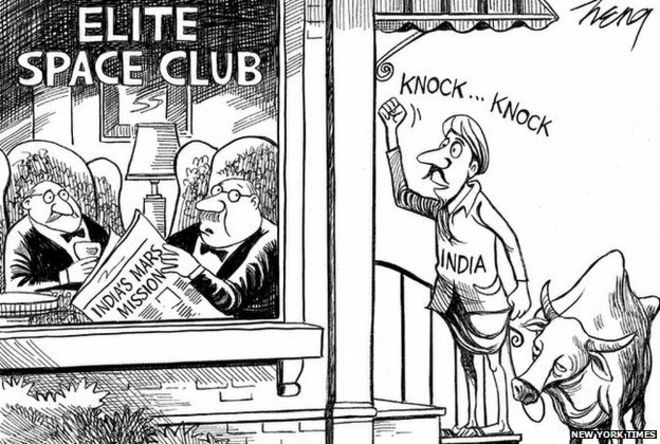 Even though the cartoonist Mr Heng Kim Song, states that his intentions were to “highlight how space exploration is no longer the exclusive domain of rich, Western countries”[14], this cartoon is clearly offensive due to the implicit association of India with a rural lifestyle and poverty, showing that in academia there will always be an “Us” vs “Them” mentality and how any effort a non-western/developing country makes to advance scientific achievements will be maligned, a barrier which needs to be removed if the world is to make true progress and ensure science’s achievements benefit all.

Another example of the bad media portrayal of the work done on the Mars Orbiter Mission is a report from the BBC on BP Dakshayani, the former Group Director of the Flight Dynamics and Space Navigation groups of the ISRO Satellite Centre mentioned earlier in this article, entitled    “How to cook curry and get a spacecraft into Mars Orbit”[15]. This article, which includes snippets from an interview with Dakshayani, barely focuses on the science behind her pivotal role in M.O.M or how she achieved it; instead the reporter asks her husband how he would rate his life with her out of 10, and even though the reporter states that in the interview Dakshayani “lists the differences and the tremendous similarities between Earth and the red planet”, this isn’t elaborated on any further in the article.

The title alone is indicative of how bad the reporting on the achievements of women of colour are; the association of “curry” due to her race, and her ability to cook curry taking precedence over her literally getting a spacecraft into Mars orbit, since this is mentioned second!

While it was nice to hear about her daily family life, it should not have been made the main focus of this interview or the article; you would not see a male scientist’s accomplishments reported on in the same way, and I have the feeling their wives would not be asked how she rates his life with him out of 10.

Indian women who devote their lives to scientific research should have their brilliance and talent showcased in articles which focus on it; they already have to contend with so much with regards to the patriarchal attitude towards higher education and work/life balance which exists in their culture. They should be treated with respect, and not have articles written on them which laud their ability to cook curry more than their achievements.

Bannihatti (BP) Parameshwarappa Dakshayani, Ritu Karidhal, Nandini Harinath, Anuradha TK are just four out of the many astounding women that work in space science at ISRO, more information on them and the space science carried out can be found here: https://www.isro.gov.in/

References are categorised by the following types:

For more information on the Mars Orbiter Mission please see this post: How BBC News Reports on WOC in STEM.

For more information on POC scientists please visit our resources page or read through the rest of our blog. We are constantly updating both.

Written by Pruthvi Mehta. For more information see the about page or follow her on Twitter @q_the_ordinary.

– Funded by  The Royal Astronomical Society –